The Ornament of the World: How Muslims, Jews, and Christians Created a Culture of Tolerance in Medieval Spain
by María Rosa Menocal


The Islamic empire of al-Andalus was known in its time as “the ornament of the world.”  In particular, its capital city, Córdoba, was widely noted for its cosmopolitan culture, diverse population, and artistic achievements.  In this masterful and entertaining history, Yale University professor María Menocal explains the great successes and turbulent times of al-Andalus, which embraced much of the Iberian Peninsula from the eighth to the fifteenth centuries.  To explore the varied culture of the Muslims, Jews, and Christians who lived together under imperial Andalusian rule, Menocal takes the reader to the vaults of the Great Mosque of Córdoba, onto battlefields outside Paris, and to King Ferdinand’s tomb, inscribed in Arabic, Hebrew, Latin, and Castilian.  The Ornament of the World conveys the richness, complexity, and continuing influence of this culture in poetry, architecture, politics, and religion. The book also illustrates a strong correlation between the empire’s achievements in these areas and its tradition of religious tolerance. 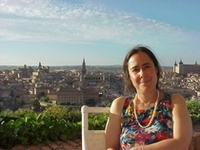 María Rosa Menocal is a Cuban-born scholar of medieval European culture and history.  She earned her bachelor’s, master’s, and doctoral degrees from the University of Pennsylvania, where she also taught Romance philology before joining the faculty of Yale University in 1986.  Menocal is director of the Yale Whitney Humanities Center. She was a coeditor of The Literature of Al-Andalus, a volume in the Cambridge History of Arabic Literature series, and is the author of several books, including The Arts of Intimacy: Christians, Jews, and Muslims in the Making of Castilian Culture (2008).