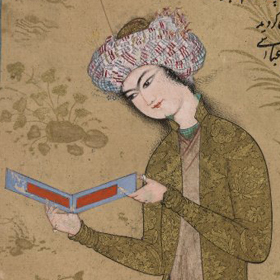 The Conference of the Birds
by Farid Ud-Din Attar

From formal poetry and the oral tradition of public storytelling to the more contemporary forms of memoir and the novel, many Muslim authors have posed questions about Muslim piety and identity.  What does it mean to be a good Muslim?  What does Islam require of women and men?  How should a good Muslim behave within society? Does Islam promote specific political norms or practices?

The readings for this theme can be seen as literary reflections on questions such as these.  Islam has long provided a source of inspiration through which Muslims experience, understand, and guide their everyday lives. In the works featured here, answers to these questions differ from one reading to the other, as each reflects the society in which it is written. Together they reveal how Muslims living at different times and in different places have interpreted Islamic traditions to meet their distinctive cultural realities and spiritual needs.

Still there are common threads that tie the readings together. The Arabian Nights, for example, is a cultural touchstone, serving in many subsequent literary works of the Muslim world as a source of inspiration for navigating between tradition and modernity, as the sanctuary of an idealized past in troubled times, or as a foil for exploring tensions between a secular establishment and the cultural revival of the Islamic faith in a globalized world.  And, as each of these books considers various, contrasting, pathways toward transcendent faith and worldly identity, the mystical overtones of Muslim Sufi philosophy serve to complement formal religious requirements and local conditions.

Read an annotated bibliography of further resources for the Literary Reflections theme.

For more on the Literary Reflections theme…

Leila Golestaneh Austin is Professorial Lecturer in Global Theory and History and Middle East Studies at Johns Hopkins University's Paul H. Nitze School of Advanced International Studies (SAIS) where she also directs the Cultural Conversations project at the Foreign Policy Institute and co-directs the Global Politics and Religion Initiative. Dr. Austin's research interests include the role of religion, literature, and political culture more generally in defining politics and policy-making, and the history and politics of the Middle East and North Africa. She received her Ph.D. in political science from Columbia University and her M.A. in International Affairs from SAIS. Dr. Austin's most recent articles include: "The New Opposition in Iran" (2010) and "The Politics of Youth Bulge: From Islamic Activism to Democratic Reform in the Middle East and North Africa" (2011).