Leila Aboulela’s novel Minaret follows the spiritual journey of a young woman exiled from her home in Sudan and forced to invent a new life in London, far from the comforts of her privileged childhood and secular education. She supports herself as a maid caring for the children of wealthy Arabs.  Struggling to establish a new sense of identity, she finds herself drawn to a community of observant Muslim women at a neighborhood mosque, who provide spiritual and emotional support as she navigates a range of challenges. The young woman comes to express a newfound piety, embracing the traditions of veiling, prayer, and fasting. 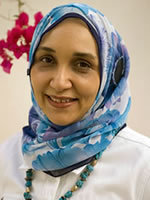 Leila Aboulela was born in 1964 in Cairo and grew up in Khartoum, Sudan. She studied for a degree in economics at Khartoum University, then moved to England to obtain a master’s degree at the London School of Economics. Several of her short stories have been published in anthologies and broadcast on radio.  One of her stories, “The Museum,” won the Caine Prize for African Writing in 2000. Her short-story collection Coloured Lights was published in 2001. She is also the author of the novels The Translator (2006) and Lyrics Alley (2011). Aboulela lives in Abu Dhabi, United Arab Emirates, and Aberdeen, Scotland.