In 2004, the noted scholar of comparative religion F. E. Peters produced a new edition of his well-regarded Children of Abraham. When initially published three decades ago, the book was one of the first scholarly works to place Islam alongside Judaism and Christianity to explain their commonalties and connections. In a concise volume of less than 300 pages, Peters reviews the Abrahamic tradition from the sixth century BCE to the thirteenth century CE, exploring the intertwined relationships among the three faiths’ holy scriptures, rituals, communities of believers, laws, theological systems, and traditions of mysticism, discussing, for example, the response of all three religions’ great thinkers to Greek philosophy. 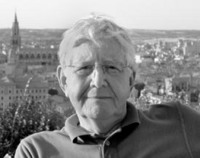 Francis Edward Peters is professor emeritus of history, religion, and Middle Eastern and Islamic studies at New York University. He holds a PhD from Princeton University in Islamic studies. Though formally trained as both a classicist and a scholar of Islam, Peters is best known for his work in the history of religion, a field where he was a pioneer, though he has also come to be regarded a leading scholar in the comparative study of Judaism, Christianity, and Islam. He has written more than twenty books on this topic, including The Monotheists: Jews, Christians, and Muslims in Conflict and Competition (two volumes), and The Voice, The Word, The Books: The Sacred Scriptures of the Jews, Christians, and Muslims.