The Story of the Qur’an begins with an accessible account of the origins of the Qur’an that places Muhammad, the Muslim holy book, and the first adherents to Islam in historical context.  Ingrid Mattson, a professor of Islamic studies, uses translated passages from the Qur’an, as well as scholarly sources and stories from the time of Muhammad, to give readers a sense of the language, imagery, and rhythm of the Qur’an. Mattson also explains how the Qur’an has been transmitted both as recitation and scripture, “the voice and the pen,” from Islam’s formative days to the present. She describes the Qur’an’s role in Muslim culture and daily life, and provides a guide to its traditions and sources of interpretation, cautioning casual readers and others who might pull verses out of context to take care in trying to ascertain what all Muslims believe or are mandated to do. 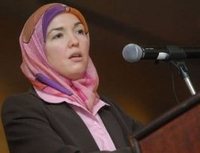 A native of Canada, Ingrid Mattson is professor of Islamic studies, founder of the Islamic Chaplaincy Program, and director of the Macdonald Center for Islamic Studies and Christian-Muslim Relations at Hartford Seminary in Connecticut. In 2006 she was elected president of the Islamic Society of North America, the first woman and first convert to Islam to hold that position. She earned a PhD in Islamic studies from the University of Chicago and has written and lectured extensively on the relationship between Islamic law and society, and on gender and leadership issues in contemporary Muslim communities.