The Columbia Sourcebook of Muslims in the United States
by Edward E. Curtis IV, editor


Edward E. Curtis IV places a treasure trove of information about Islam in the United States at the reader’s fingertips. The primary sources that make up this collection are arranged chronologically: from the early nineteenth century to World War I; from World War I to 1965; from 1965 to September 11, 2001; and from 9/11 to the present. More than fifty excerpts from personal accounts, books, songs, poems, and institutional documents by and about Muslims give the reader unparalleled access to the stories and views of Muslims in the United States and the larger society’s responses to their presence. Themes such as conversion, spirituality, gender, law, and politics are sampled, with a generous share given to the voices of Muslim women and leaders of the Muslim community. The Columbia Sourcebook of Muslims in the United States is an invaluable resource for those who wish to hear the authentic voices of Muslims in America. 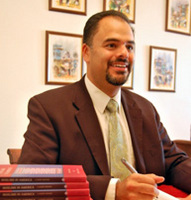 Edward E. Curtis IV is Millennium Chair of the Liberal Arts and professor of religious studies at Indiana University–Purdue University Indianapolis (IUPUI). He is the author of several books, including Muslims in America: A Short History, and is a founding coeditor of the Journal of Africana Religions. A former NEH Fellow at the National Humanities Center, Curtis has also received Carnegie, Fulbright, and Mellon fellowships.