The House of Wisdom: How Arabic Science Saved Ancient Knowledge and Gave Us the Renaissance
by Jim Al-Khalili


The House of Wisdom in Baghdad stands as a symbol of the great synthesis of Greek science and philosophy, Indian mathematics, and Persian literature brought about by their translation into Arabic in the eighth century CE.  Jim Al-Khalili details scientific advances within Islamic civilization that resulted from this burst of intellectual activity and experimentation. The story told in The House of Wisdom is not an isolated one, as the author ties scientists who worked in the medieval period in Muslim regions to their counterparts in other times and places, and traces the pathways this knowledge took across the Mediterranean world until it reached Europe’s growing universities in the twelfth century. Al-Khalili provides fascinating insights into the process through which Islamic civilization stimulated the European renaissance. 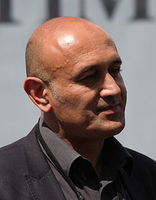 A native of Iraq, Jim Al-Khalili is a theoretical nuclear physicist and senior lecturer in the Department of Physics at the University of Surrey, England, where he teaches relativity theory, quantum physics, mathematics, and computer modeling.  Long active in communicating science to the public, and the author of four popular science books, Al-Khalili received the UK Institute of Physics Public Awareness of Physics Award in 2000.